Ellipses and Designs in Perspective

After working on the drawing above, I noticed that some of the ellipses at the bottom of the vase, right above the base looked wrong, starting at the 6th ellipse up from the bottom. The sixth ellipse seems to have a shallower angle than the fifth. I wasn’t sure if the major axes were too long, forcing me to place them too high on the vase, or if I had misjudged the angles. I did some rechecking and redrawing. I had indeed, mis-measured some of the major axes. Also, the angle wasn’t quite right! Sometimes, it’s not just one thing that’s wrong, so corrections can be hard! 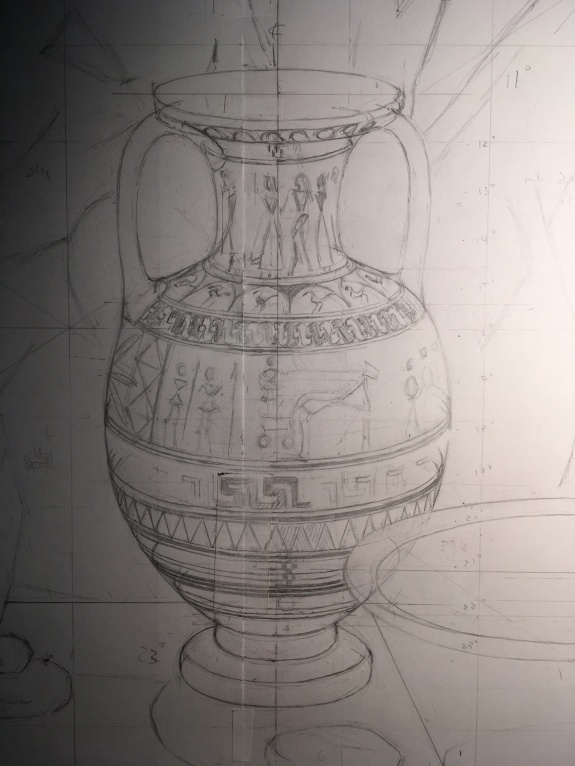 Above, the ellipses flow more smoothly one to the other.

My next problem was that the zig-zag pattern seemed wrong. The pattern didn’t seem to be receding enough in perspective as it approached the sides of the vase. I decided to try to calculate it instead of eye-balling it.

Above, I drew a circle the same diameter as the top ellipse of the zig-zag band, and marked off the correct number of zigs and zags. (I estimated this number, as I couldn’t see all the way around the vase, and didn’t want to disturb my set-up. I don’t think that will make too much difference.) I counted 10 repetitions per quarter circle. I divided 90 degrees by 10 and marked off 9 degree increments on my circle. I drew verticals down from these points to my ellipse and marked off the intersections.

I saw right away that something was off. The triangles weren’t tilting out to the sides of the vase as they wrapped around towards the back. I had forgotten that the vase is sloped and that the ellipse that marks the bottom of the zig-zag band is smaller that the top one. The tick-marks for the tops of the triangles were correct, but the bottom points  had to be drawn from a smaller circle.

In the drawing above, you can see that I’ve now drawn two concentric circles the sizes of the top and the bottom of the band. I get the top points of the triangles from the red lines drawn vertically from the larger circle, and the bottom points from lines drawn from the smaller inner circle. Now, the zig-zag pattern tilts convincingly as it approaches the sides of the vase.

Though I could have drawn this by eye if I worked hard enough at it, I found it very helpful to calculate the correct perspective. Sometime a little hard knowledge really helps you to see. Though I already knew that the pattern would get smaller as it went around the curve of the vase, and that the patterns would seem to tilt more as they approached the edge, seeing it accurately drawn really cemented those ideas in my head, and gave me a clearer idea of why they were true.