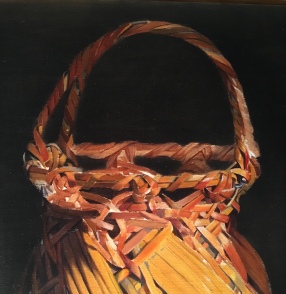 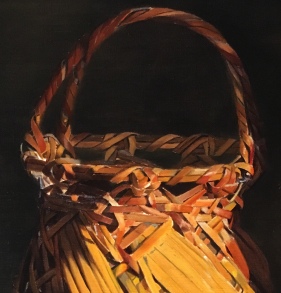 The top of the basket and right side of the handle are the only areas with underpainting still showing, so I tackled them next. The back edge of the rim and parts of the handle will be in shadow. I’ll paint these areas lighter and then glaze over them later to darken them to the correct value. I’ll paint the lightest areas more light than they would be in comparison to the darks, because the glaze tends to obscure them more than the mid-tones. Above, on the right, I’ve covered the underpainting in those areas. 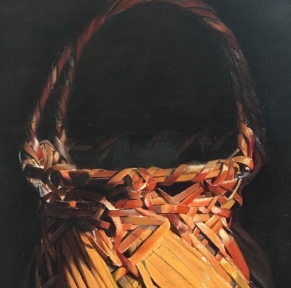 At my next session, I glazed the rear rim and parts of the handle. On the left above, is how it looked from my last session. On the right, I’ve glazed over the shadows. You can see a lighter patch in the middle of the glazed area. Sometimes, a glaze will sink into the drier layers of paint below it, and appear flat and chalky. This is called ‘sinking in’ and is very annoying because an area that you intended to look darker, appears lighter! Fortunately, this can be fixed after the glaze dries completely by rubbing a small amount of glaze medium over the area. This brings the gloss back up and darkens the area. I run into this problem constantly. I’ve read that rubbing a small amount of glaze medium over the painting before applying a glaze will prevent this from happening, but I’ve not had much luck with it. In any case, you have to rub the medium onto the sunken-in areas before you can begin to paint again. This brings them up to the correct value so that you can judge the other areas of the painting.

The top of the basket is getting close to the correct values and colors now. I want to add some more color to the shadowed areas, and maybe add some strokes of thick paint on some of the bamboo strips to give the area some more dimension- but not too much! Details in shadows should be obscure and muted.

I’m beginning to think that the colors in the light side of the basket are too warm. I might decide to mute some of the warmth with some cool scumbles. A scumble is a semi-covering layer of light valued paint. It is usually applied with a dry brush dragged lightly over the surface. The paint catches only on the tops of the weave of the canvas, allowing the under layer of color to partially show through. Scumbles appear cool. I could also repaint some of the bamboo strips with a cooler color, I’ll experiment to see what works. The great thing about oil paint is that you can endlessly experiment.